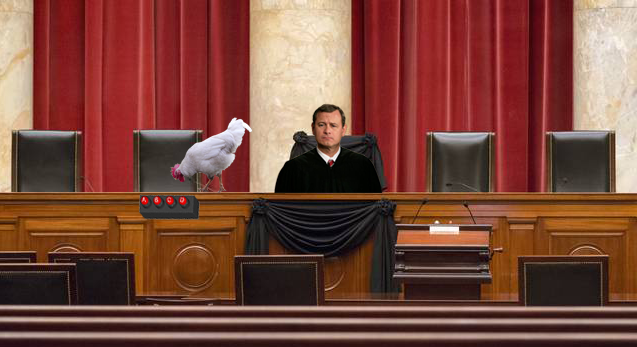 WASHINGTON, D.C. — With its new conservative majority, the Supreme Court has decided to simplify its once exhaustive legislative decision-making process and replace eight of its members with .

Since all eight of these Justices have already made up their minds on all matters that will come before them, the Congressional Budget Office has determined that they can save up to $300M per year by bringing in a game-playing chicken to peck at dissenting opinions. Although conservative Roberts has also already made up his mind, the White House felt it was important to have a human face representing the most powerful court in the nation.

The chicken, Frederick Feathers, will peck at different buttons offering criticisms of Justice Roberts’ decisions before passing them in to law. Options such as “What about the Constitution?”, “Discrimination is un-American”, “Women and minorities are people too”, will be pressed with the chicken’s beak before being printed on legal paper and distributed by the clerk of courts.

Frederick Feathers worked his way up to the Supreme Court from humble beginnings as a sideshow at the Missouri State Fair. Renowned throughout the state for his excellent judgement and decisiveness, Justice Feathers was soon touring the country with a band of Romanian musicians.

His meteoric rise to the nation’s highest court came about when President Trump was seeking an advisor he could trust on policy decisions without fear of leaks. Attorney General Jeff Sessions submitted Mr. Feathers who he had known from their time working children’s birthday parties together in Alabama.

“We bent over backwards to make this fair,” said Senator Lindsey Graham (R-SC), “But knowing the Dems they will probably even complain about this.”

Although all final judgements will ultimately be made by Justice Roberts, Frederick will offer his compelling arguments in order to create some semblance of judicial discourse in Supreme Court rulings.