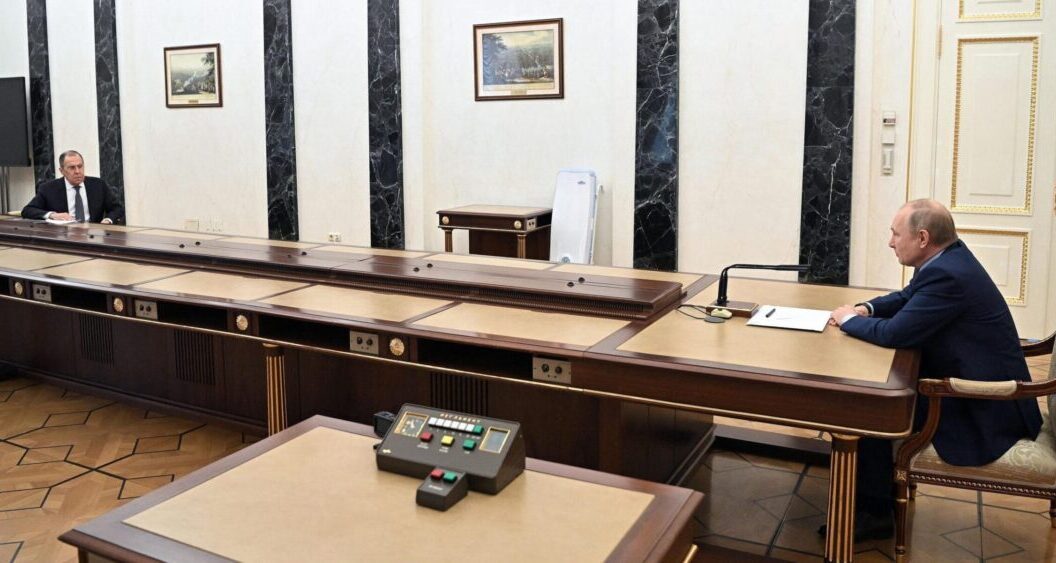 MOSCOW, RUSSIA — At a contentious press conference this morning, Russian dictator Vladimir Putin reminded reporters that the sole purpose of his invasion of the Ukraine was to ‘liberate them from their freedom’. He repeated his claims that Ukrainians were Russians and that the population was grateful that he had sent in the Russia military.

“The West is an empire of lies. Everyone is against me, but I am the great liberator!” He yelled from the far end of a 50 foot long table.

“I have liberated nearly all Russians from their wealth. I have liberated countless reporters and politicians of their lives.” continued the visibly frustrated Russian leader, “I also vow to liberate the next reporter who asks me a tough question from their head.”

One reporter managed to ask Mr. Putin if he was still sound of mind, before having a black bag draped over his head and being dragged out a side door by Chechen thugs.

“Just because I refuse to let any human being within 50 feet of me and I have sustained exclusively on raw onions for the past two years, doesn’t mean I am not fully capable of making decisions about the appropriateness of genocide as a means of getting what you want.”

While most of the global community has called the Russian invasion of the Ukraine an unprovoked act of war, Putin has portrayed it in a different light and has refused to call the attack anything more than a peacekeeping mission.

“All those Neo-Nazis in the Ukraine are Russians who pose an existential threat to Russians because they are drug addicted non-Russian Jews. But also Nazis. And 100% sober. Wait…”

At which point Mr. Putin blew some glowing green dust in the face of the guy who arranged the press conference.