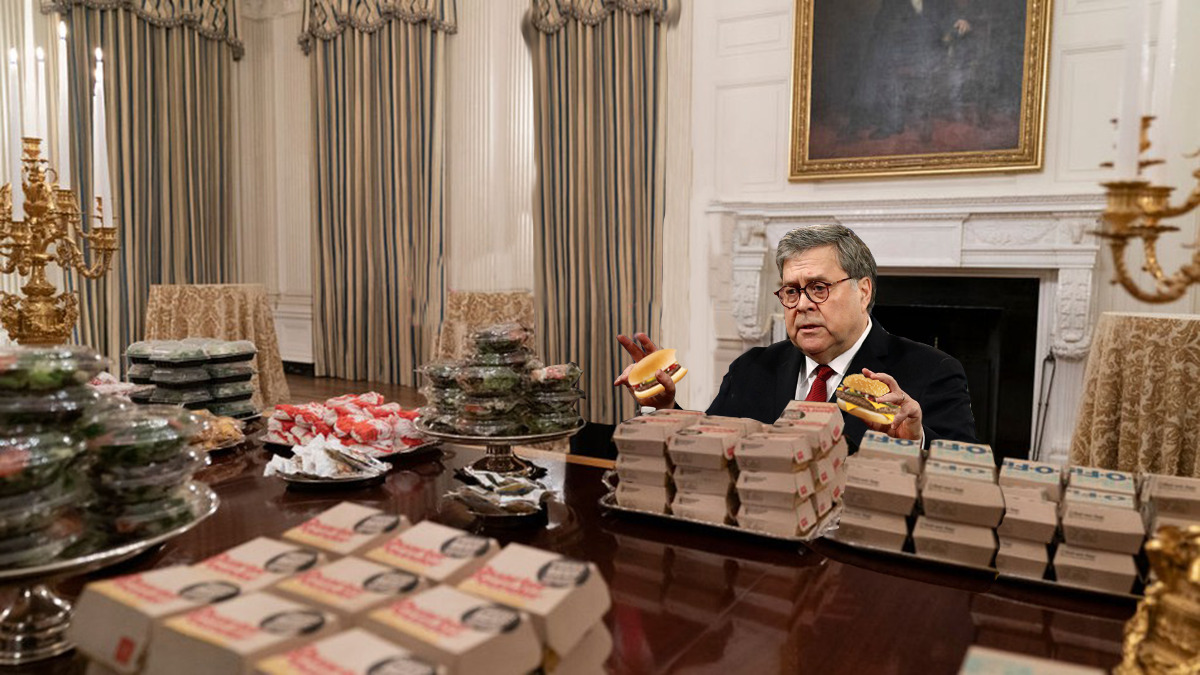 WASHINGTON, DC — As questions swirl about what would cause a longtime Washington insider like Bill Barr to sacrifice his reputation for the embattled president, new details are emerging about secret White House meetings between the two men over the past 3-months. A startling new report reveals a sordid tale of a desperate president trying to buy Barr’s loyalty, and a ravenous Attorney General with an insatiable appetite for cheeseburgers.

Multiple sources leaked information about the secret meetings as lawmakers tried to comprehend Mr. Barr’s blind loyalty to President Trump. Caterers from the meetings claim that they were moved to come forward after watching Mr. Barr lie during congressional testimony.

“He said he wasn’t biased,” said one caterer, “But I saw the way he looked at the president when he told him all those cheeseburgers were for him. It clearly meant a lot to him.”

Several sources claim the president invited Mr. Barr to the closed door meeting in an attempt to woo his loyalty and escape prosecution after the release of the Mueller report. But until the caterers stepped forward, few knew the details of their secret rendezvous.

“The president had us stack cheeseburgers halfway to the ceiling,” said another caterer, “And when Mr. Barr saw that, he just went silent for a few minutes and tried to compose himself.”

While the president has made no secret his love of McDonald’s, new details are emerging about Mr. Barr’s often tumultuous relationship with fast food. Buried court papers paint a picture of a man often moved to violence by arguments over who ate the last cheeseburger. One twenty-year-old lawsuit claimed Mr. Barr ripped a McDonalds drive-thru speaker out of the ground with his bare hands after they refused to serve him cheeseburgers before 11am.

Undoubtedly, many will ask if the president was aware of Mr. Barr’s affinity  for cheeseburgers and if he exploited this to his advantage. Congressional Democrats are already calling for an investigation into whether the president ordered the DOJ to research Mr. Barr’s weaknesses.

Before assuming the role of Trump’s Attorney General, Mr. Barr spent decades as a respected DOJ lawyer and the AG under the HW Bush administration. During his tenure he earned a reputation as honest and unflappable. But in his private life, he struggled with an ongoing battle with cheeseburgers.

Republicans were quick to deny claims that Mr. Barr’s cheeseburger vulnerability had compromised his impartiality.

“The idea that General Barr could be bought with cheeseburgers is outrageous,” said Sen. Lindsay Graham(R-SC), “Next they’ll say I got bought by the Russians for a few buckets of succulent southern fried chicken?”

In one reported meeting, witnesses claim the two men embraced for several minutes before dismissing the catering staff and engorging themselves. They say the dining continued through the night and into the early morning.

“When the cleaning staff arrived it looked like a murder scene,” said one White House staffer, “There was ketchup everywhere. But the eeriest part was that they didn’t find a single leftover crumb.”